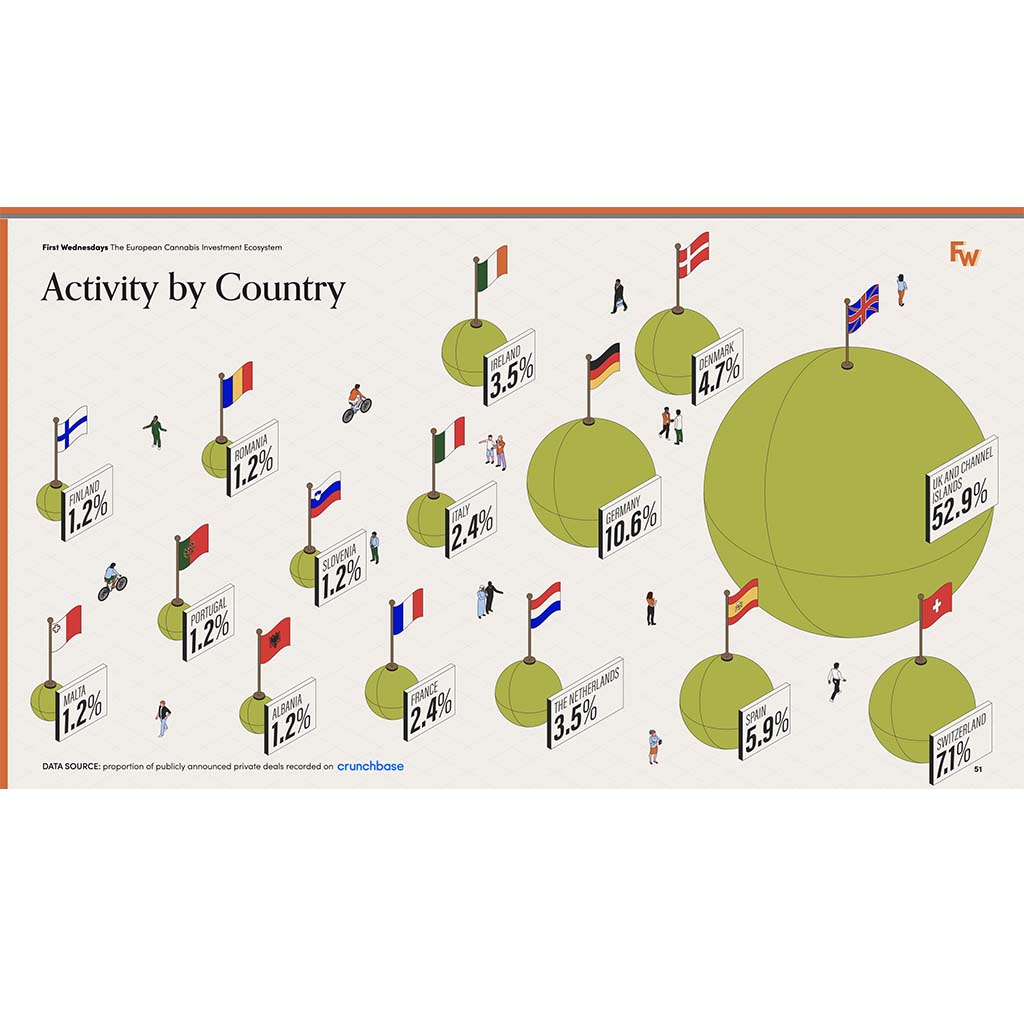 The UK is generating over half of Europe’s activity in the cannabis sector. So suggests The European Cannabis Investment Ecosystem, a report produced by advisory firm Hanway Associates, and published by First Wednesdays, a network of European investors and entrepreneurs working in the sector.

“The UK has the highest publicly reported value of cannabis deals according to Crunchbase data [an investment data firm], boosted by its status as Europe’s largest CBD market, and its growing medical cannabis patient-base and infrastructure.

“A flurry of interest in the UK sector emerged following the Financial Conduct Authority’s announcement that both UK and overseas cannabis companies could be listed on the London Stock Exchange, given that the City of London is renowned for its robust financial ecosystem and is a leading corporate advisor to wider Europe.”

The 67pp illustrated report is intended to be “a snapshot of the investment landscape in the European cannabis sector, rather than an attempt to place a size on the entire market or to create an exhaustive list of deals.” It looks at the milestone deals which have been made, and what they might tell us about the developing industry and investment models.

“The ebb and flow of capital into the European cannabis sector is both fascinating and turbulent,” writes Alastair Moore, co-founder of Hanway Associates and First Wednesdays. “The continent has bobbed along in the wake of its relatives across the Atlantic, unsure of its role in the global sector.”

The report looks at the different sorts of investors coming in to the sector, from venture capitalists and high-net-worths, to crowd-funders. It gives brief analysis of different markets across Europe, and considers various market subsectors: wellness, medical, pharma, industrial hemp, and adult-use.

Its analysis of the CBD sector is encouraging. ”The CBD wellness market has captured greater investor attention in Europe than in North America due to the lack of commercial adult-use opportunities. Currently, the wellness segment is one of the only places where companies can build brands and directly market to consumers—with distinctly European multi-country and multi-channel brands now emerging.

“The wellness sector garnered less interest from investors when companies were typically small, very locally focused, and often semi non-compliant. The multitude of regulatory quirks and CBD’s status as an unapproved novel food prevented serious investment from pouring in.

“We are now seeing companies generating real revenues in the wellness segment in
a formal, compliant manner. With the UK Food Standards Authority’s clear route to compliance and the expectation of reform across the continent, appetite for investment has risen.

“Investors take on significant risk when backing early stage CBD brands due to such high rates of competition and fragmentation in the market. Brands are driving value and the majority of investor interest, with less investment into product innovation and bioavailable formulations at this stage.

“With significant interest and early signs of activity from FMCG and CPG companies, it will be interesting to watch which CBD brands have the ability to capture long-term value.”