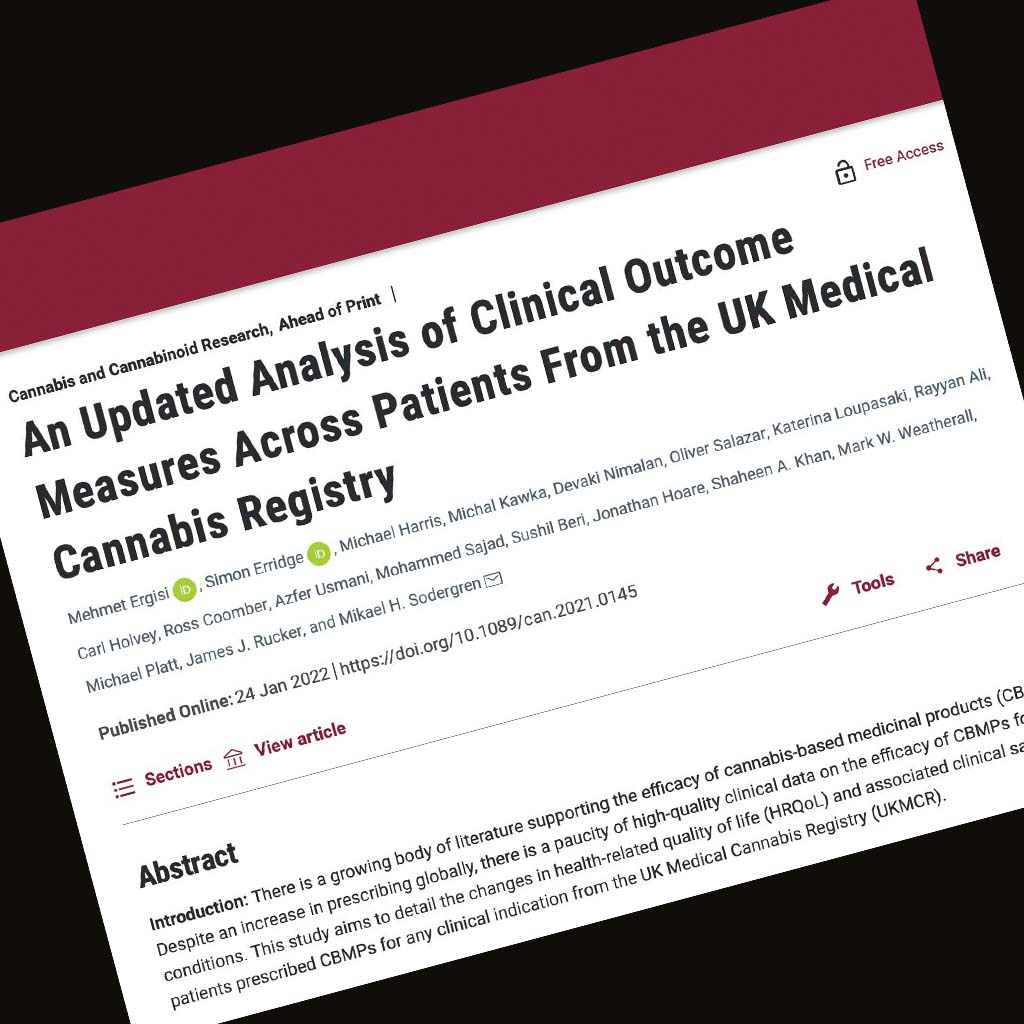 A real-world study of the efficacy and side-effects of cannabis-based medicinal products (CBMP) on 312 patients has observed in general positive changes following treatment. There was “a relatively-low incidence of severe adverse events in the medium term”, the study noted.

The findings came from the UK Medical Cannabis Registry (UKMCR) which has been established by physicians from the Sapphire Medical Clinic as a means of collating outcomes on medical cannabis prescribing. This clinic was set up by doctors to “enable access to medicinal cannabis for patients who will derive clinical benefit through consultation with expert doctors working within a framework approved by all relevant regulatory authorities”, according to its website.

The title of the study is An Updated Analysis of Clinical Outcome Measures Across Patients For the UK Medical Cannabis Registry, by Mehmet Ergisi, Simon Erridge, Michael Harris and 16 others. It analyses data about changes in patients’ health-related quality of life. Patients completed forms at the outset, then reported changes at one, three and six months after commencing treatment using two measures (the generalised anxiety disorder scale and the sleep-quality scale), and also detailed the incidence and severity of related adverse events.

The most common diagnoses of patients on the trial were chronic pain of undefined etiology (32.7%), neuropathic pain (13.8%) and fibromyalgia (9.9%). The study distinguished between patients who had never taken cannabis, those who had taken it in the past, and those who were taking it daily before the trial commenced (35.9%).

The study noted that “Interestingly, those who were already consuming cannabis had significant improvements in GAD-7, EQ-5D-5L anxiety and depression subscale, and the EQ-VAS at varying timescales. This contrasts with previous data from the UKMCR, which showed greater improvements in pain-specific PROMs in those who were previously naive to cannabis prescribed a specific group of oil-based CBMPs.”

The limitations of this study were outlined, including: “It is unable to determine causality between CBMP therapy and the observed effects because of its observational nature and lack of a control group or incorporation of external factors not captured by the UKMCR. It is notable that there are fewer patients at each follow-up and this change may introduce selection bias secondary to cessation of treatment due to lack of clinical efficacy. It is not possible to ascertain from the UKMCR if any decision to stop treatment was due to cost, clinical ineffectiveness, or inability to tolerate side effects.

“Moreover, this study is affected by inherent selection bias. The included patients were all treated from one clinic, which is only accessible through self-funding.”

The lack of randomised controlled trials has been frequently cited as a difficulty in NHS prescribing of medicinal cannabis, and was mentioned by opponents during the debate of the private members bill, The Medical Cannabis Access Bill, in December. The study noted: “Given the numerous limitations of this open-label case series, these results must be interpreted with caution. In future, robust randomized controlled trials, built upon this case series, will be paramount for further exploration of CBMP outcomes.”

It also concluded, “Randomized controlled trials are still awaited to assess causation; however, real-world evidence can help inform current clinical practice, future trials, and is an important component of pharmacovigilance.”