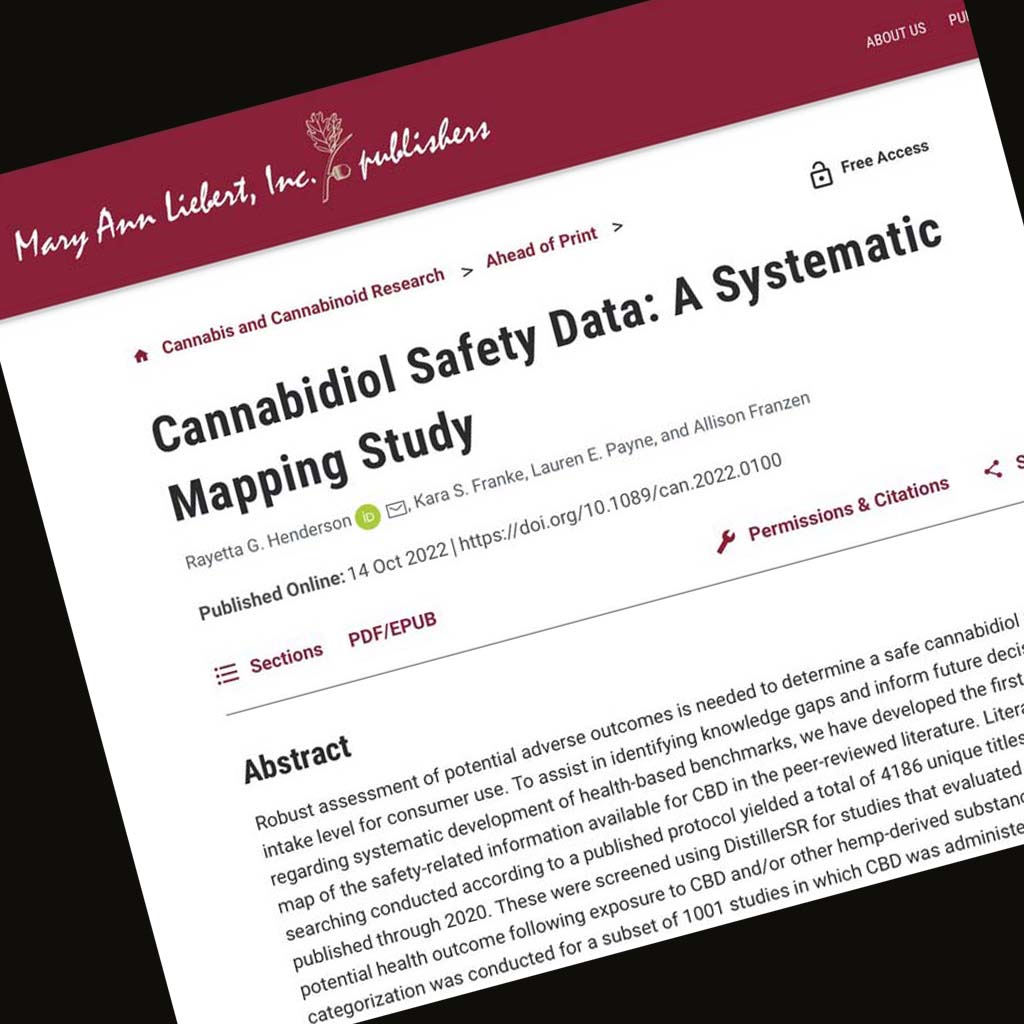 An interim study, as part of an ongoing, larger project to map research which may contribute to determining a safe CBD intake level for consumer use, has been published.

While a literature search for titles and abstracts relating to the wider project has found 4,186 studies that “evaluated at least one potential health outcome following exposure to CBD and/or other hemp-derived substances”, the authors write, for this ‘mini-review’ they have taken a subset of 1,001 studies where CBD was administered alone.

“In these CBD-only studies, study populations or study models were primarily experimental animals, followed by in vitro models, and then humans. Neurological, carcinogenic, and drug interaction outcomes were reported on most frequently,” the authors report, noting that less frequently studied categories include developmental and reproductive, hepatic, and gastrointestinal outcomes.

They explain that the primary focus of the review was to “identify data reporting potential adverse health effects to support a future health-based benchmark, studies reporting beneficial or therapeutic health effects were also included.”

The studies examined were published between 1972–2020. The US-based authors note: “The screening described herein identified nearly as many studies (393) evaluating the safety of CBD (administered alone) in the three years since the [US] Farm Bill (2018–2021) as those published before 2018 (607).

“The number of studies published on all cannabis-derived substances is much higher and continues to grow annually; a keyword search for “cannabis” in PubMed in December 2021 yielded >27,000 results. For this reason, it is critical that data on CBD continue to be collected systematically and reviewed as they become available.”

While in some studies, adverse events were reported as secondary outcomes, in 43 studies they were the primary outcome described or potential toxic effect was investigated. The authors report, “Dose levels associated with any reported effect were not evaluated as part of this mapping exercise. The primary outcomes associated with the most adverse events reported in the literature were neurological (13) and developmental and reproductive (12). Of the 19 CBD studies in which the primary outcome involved developmental and reproductive effects, 12 were designated as being adverse.

“Most adverse outcomes reported in the remaining studies were associated with general toxicity, drug interactions, and hepatic outcomes. Only 3.2% (13/403) of studies with neurological primary outcomes reported adverse outcomes associated with CBD exposure. Six of the 13 adverse neurological studies were from healthy human populations, whereas only one study was categorised as occurring in an unhealthy human population. The remaining neurological studies composed non-mammalian, experimental animals, or human epidemiology populations (eg observational studies).”

The authors state that their ‘map’ provides a baseline from which to identify “outcomes or other subtopics that may be suitable for further research related to the safe use of CBD”. They note that the map indicates gaps in publicly available data, taking as an example reproductive toxicity. They add that studies submitted to the US Food and Drink Adminstration on behalf of the CBD-based drug Epidiolex “can be incorporated into an overall assessment of the potential developmental and reproductive toxicity of CBD; however, these study reports are not available to the public”.

Updates to the mapping project will be made available when completed, say the authors, and “can be used in support of systematically developing health-based benchmarks for exposure to CBD”.