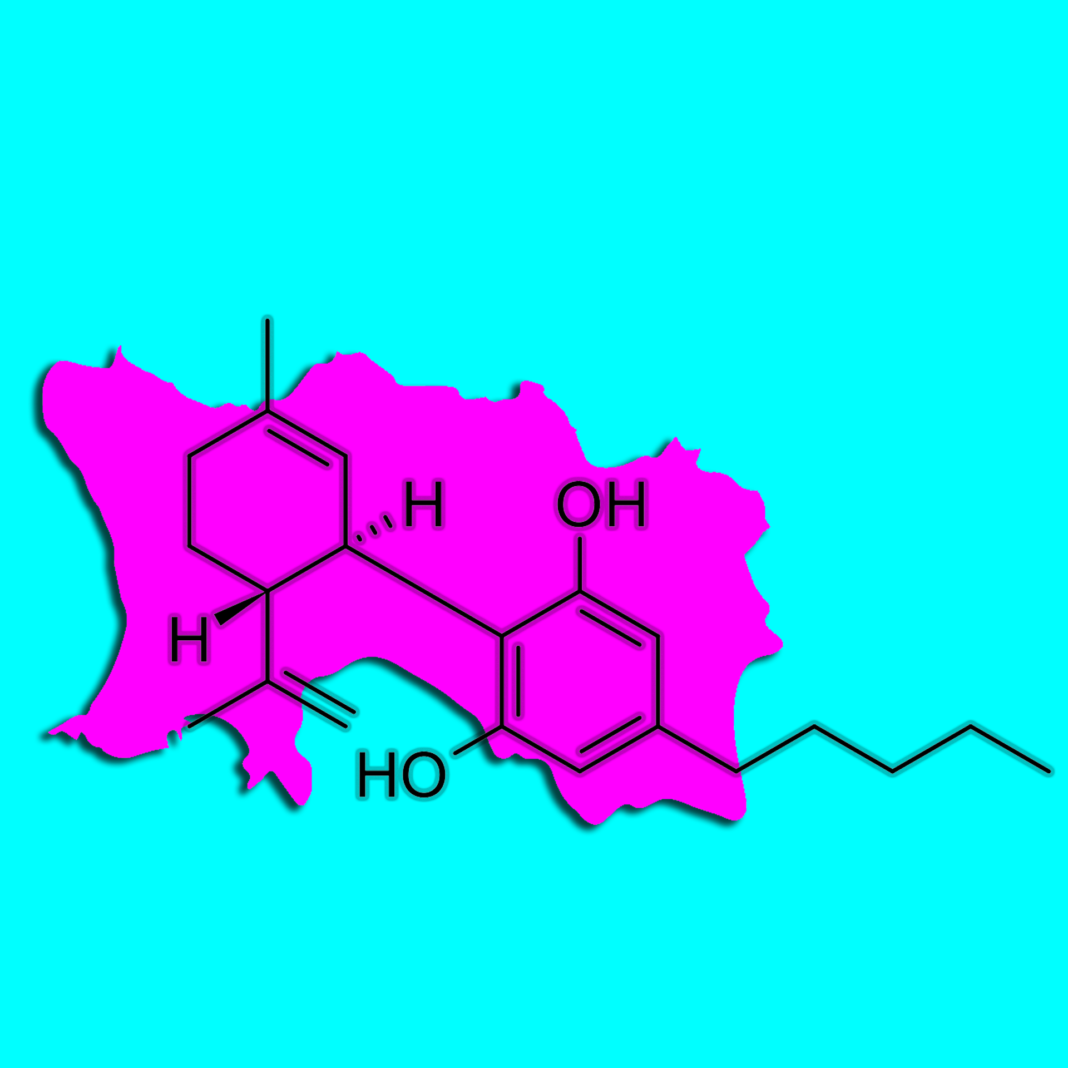 Cream, finance, potatoes—and now CBD. Jersey is spearheading a British push into CBD and cannabis products. This is an economic development story. And, so far, it’s a success story.

“Jersey is the first jurisdiction that’s really nailed their colours to the mast and moved with any real purpose into embracing this industry,” says Adrian Clarke, chief operating officer at CBD brand owner Tenacious Labs.

It’s important because, where Jersey goes, the UK government follows. The UK Home Office has a memorandum of understanding with Jersey that allows it to pinch good quality regulatory ideas. Right now, UK civil servants are watching their Jersey brethren closely. So what are the Jèrriais up to?

As with most countries, Jersey’s starting point with CBD and other cannabis products was prohibition. In order to look at moving from that to a regulated, healthy market in CBD, Jersey set up a Cannabis Coordination Group (CCG), chaired by Jersey civil servant Dan Houseago.

Watching from the wings is the UK’s Medicines and Healthcare Products Regulatory Agency (MHRA), keen to see how the CCG will effect change.

To get the tax take the Government of Jersey wants, the CCG had to start looking at repealing Jersey’s drugs laws. The first move was designed to attract investment to the CBD sector. Earlier in the summer of 2021, Jersey relaxed its proceeds of crime laws, so financing CBD production is no longer illegal.

Next move was to make production legal. That’s why Jersey deputy chief minister Lyndon Farnham announced the island’s Cannabis Strategic Advisory Board or CSAB in August 2021.

These sound like simple administrative instruments. In reality, they are the culmination of years of planning and co-ordination between different departments.

Farnham is keen to point out that the formation of CSAB is not a political risk. “It mirrors the other types of advisory bodies we have operating in other industries advising the government around the island, so it fits in very nicely. It’s independent and we want independent advice,” he says.

Farnham is keen to build strong regulatory foundations for the industry on Jersey. He talks of “quality of regulation” alongside “quality of product”. And he has planted those foundations firmly in the private sector.

“It’s been utterly professional, pragmatic and appropriate,” says Morland of the process so far. “We’re representative of international investors and inward investment to Jersey, which is important to the Jersey government, and them being prepared to adapt their regulations in the same way as everyone is saying they’re going to—but they’ve actually gone and done—is massively helpful for us. It gives us credibility with our investors, it allows us to punch above our weight, and we can be influential with the people who are trying to do it in the UK.”

Among the technical barriers the Jersey government had to clear was agricultural. Scott Meadows is in charge of biosecurity on the island. He started work in 2016 on the run up to 2021, when Farnham pressed the button on the local law changes that would see the establishment of a CBD industry on the island.

Meadows’ first job was to include CBD in Jersey’s Rural Economy Strategy, as part of diversification of the rural economy which, at the time, suffered from low GVA and a high levels of subsidy, as well as reliance on two key crops: potatoes and milk.

Meadows found it easy to endorse CBD as a suitable agricultural diversification for the island. Because of freight costs, Jersey competes poorly with other countries on commodity prices. Jersey’s agricultural goods have to be low volume and high value, which suits plant-made pharmaceuticals including cannabis production.

“We did some scoping work to see which plants might work,” says Meadows. “Cannabis was top of that list.”

Another part of the job was selling the idea of a new crop category to local farmers. Again, Meadows found Jersey suitable for that work. Its farmers are open to new ideas. “Agriculture can be slow to change but Jersey’s agriculture has been in constant change for a number of decades,” he says.

“It’s been a steep learning curve from everyone involved. The advantage Jersey has is that government is closely linked so, as a technical officer, I have very quick access to political, law and tax, and all the people we need to get into the mix to get this project to work.”

In 2017, an unnamed company from America approached the Jersey government, keen to sell it advice on how to create a framework to legitimise the production of cannabis and CBD products. “It was an interesting conversation,” recalls Dan Houseago, group director, economy, for the Government of Jersey. “The costs were high. We didn’t have any expertise at that time. The killer blow [to the American company’s aspirations in Jersey] was the idea that some third party would want to take 10% of revenue. However, it told us that there was a market there.

“We took a conscious decision that we would do it ourselves. We recognised there was no global template. But we also recognised that this was like moving out of prohibition.

“What we didn’t know at the time is how complicated it is to get the regulation and the statutory elements of this in the right place and create the conditions for businesses to want to come here, and be successful, like we have done with the financial sector.”

With CBD a controlled substance, among the topics Houseago had to cover included competition regulation, planning regulation and food safety, with the overlay of medicines law and the misuse of drugs legislation. “Medicinal THC is a good starting point for us in government, because that’s where the high regulatory standards are,” says Houseago. “The challenge for us at the moment is that there is little market intelligence, because it is such a nascent sector, so working with industry as partners is really critical and that includes conversation about where we should pitch regulation, but it also includes a conversation about self-regulation.

What Farnham, Houseago, Morrison and other civil servants have done since 2017 gets the approval of the farmers. “The regulatory model is where Jersey has done the smartest thing, which is essentially to adapt existing regulations and make a few tweaks to make it feasible,” says Renata Legierska of local grower Cicada Woodside. “The framework is there and we can proceed with confidence.”

Legierska’s colleague Charlie Gallichan agrees. “The industry group is going to be a perfect vehicle for us all to get together, talk about our common problems,” he says. “We are all going to be doing something slightly different, but we have common problems. Let’s work together. Let’s try and present a unified voice. That helps government. Similarly, government is going to have issues that the it needs the industry to help with.”

The big reason for the Jersey government—for any government—to do this is tax take from this new industry. “We have looked at other jurisdictions so we don’t give ourselves a competitive disadvantage,” says Houseago. “Our tax rate is likely to be 20% initially. Looking at Guernsey, that’s the same rate they’re going with. Producers understand that. It has not put anybody off, so that’s what we’re likely to be going with for the next five years.”

What will that yield? At a price of £3,000-£4,000 per kg, that’s a tax take of just under £5 million per ha. Houseago predicts that, with 8ha of glass growing cannabis on the island, he will see £30 million flowing into Jersey’s treasury in short order.

Inasmuch as any businessman welcomes tax, Morland is content with Houseago’s calculations. “The people we deal with pay their taxes, such as accountants and lawyers. The products we produce will pay their taxes and if, as and when, lines of business such as recreational THC become more prevalent, there’s an opportunity for government to tax it in the same way they tax alcohol.”

There’s a lobby against cannabis on Jersey. Farnham is confident that regulation will reassure residents. “We must respect the views of all people and we still have some hearts and minds to win, but I think we can do that by producing an industry that really speaks for itself, and I think it’s important we embrace regulation in the early stages,” he says.

Houseago sums up with words that would horrify the most dyed-in-the-wool Sir Humphreys. “You’ve got to take a bit of a chance with economic development,” he says. “You have to understand what market works for you.

“Make sure that, because it’s a nascent sector, and it sometimes gets bad press as it moves from black market to grey market to legitimate industry, you get the politics right, bring your population with you and tell them what the benefits are.