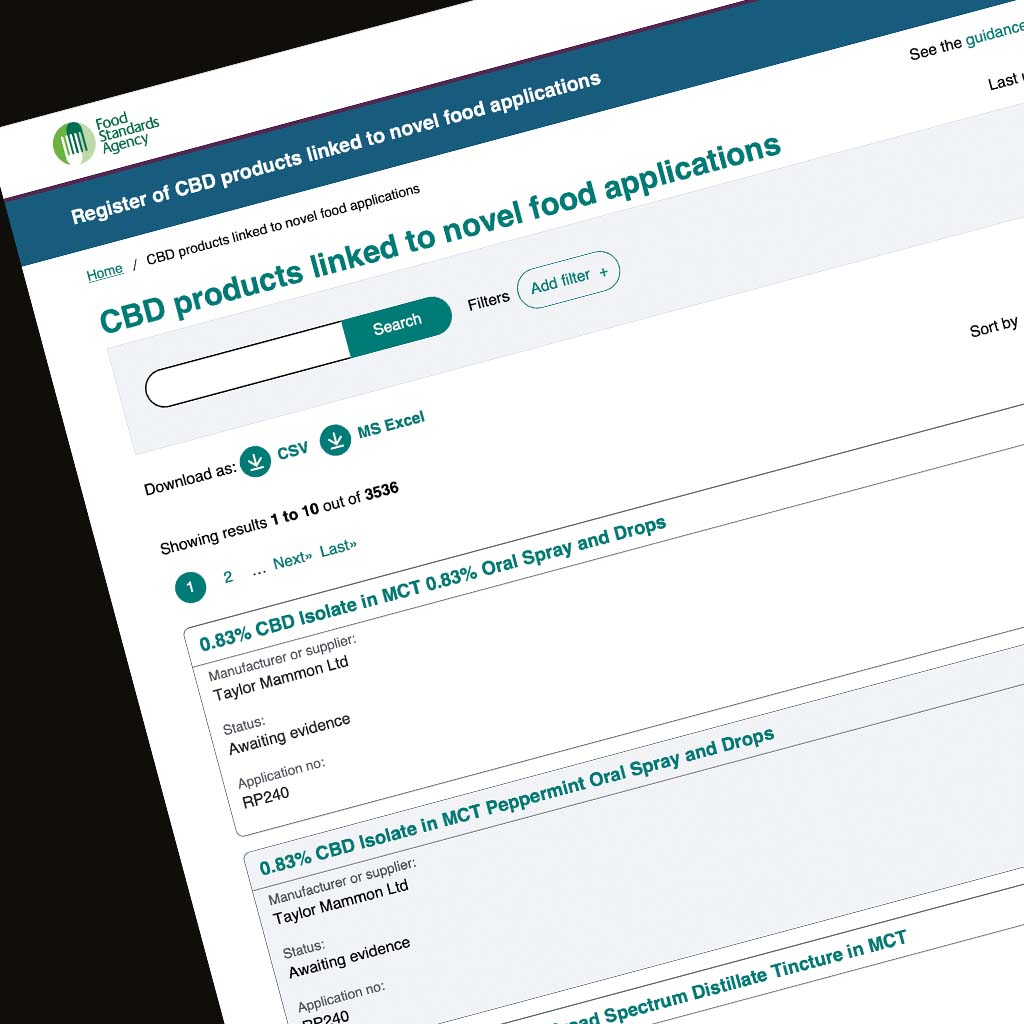 The Food Standard Agency’s (FSA) publication of its list of CBD products  which have been ‘validated’ or are ‘awaiting evidence’ yesterday was covered by national, regional and local media. If any indication were needed that CBD has become part of the national conversation, this was it.

The development has caught attention in a way that regulatory news rarely does. Among the nationals, the Guardian, Daily Mail and Daily Telegraph covered the story.

It’s another milestone in the long-running journey to bring CBD food or food-supplement products within the fold of ‘novel foods’ authorised for sale in the UK, and to exclude those products which fall short of the required standards. No products have yet been authorised, but thousands are making their way through the system.

In February, the list of the first six applications to reach the threshold of ‘validation’ (the stage before full ‘authorisation’) was published, covering 77 products. Yesterday’s list of 3,536 CBD products comprises 57 which have been validated, and 3,479 which have not yet reached the level required for validation, but which are well on the way—classed as ‘awaiting evidence’. Emily Miles, CEO of the FSA explains, “…being on the list means that the application is credible and the FSA has, or is shortly expecting to receive, significant scientific evidence from the applicant with which to judge safety.”

In the usual way of ‘two steps forward, one step back’, there has been a drop-off of 20 products between publication of the February list of validated products and the one published yesterday. An FSA spokesperson today explained to CBD Business News, “One of the applications has been removed from the list since February, because investigations in the risk assessment stage showed it no longer matches the criteria for inclusion.”

The applicant which no longer appears on the validated list is Rokshaw. In February, 20 of its products were included.

Yesterday’s list was published on the first anniversary of the deadline for products either to be submitted for authorisation or removed from the market. A spokesperson for the FSA told CBD Business News last month that it is likely to take until 2023 for products to complete the process of authorisation:

“The time it takes for novel food applications to be authorised varies and is dependent on if the applicant provides all the information needed from the start. Assuming an application passes validation, it must go through an independent risk assessment. This can take up to nine months’ work (on a start/stop the clock basis if further information is needed).

“If it is a positive outcome, then a further seven months is given to make recommendations, consult on them and put to health ministers for a decision on authorisation. If they agree to authorisation then the decision must be put into legislation.

“So far, six [now five] applications have been added to the public list and are moving to the risk assessment stage (as of 15 February 2022) so it’s unlikely there will be any authorisations until at least 2023. This list will continue to be updated as we process CBD novel food applications.”

The FSA describes its approach as “pragmatic”, using this staged regulatory approach to keep products which were already on sale on 13 February 2020 available during the long authorisation process as long as they conform to requirements at each level. Now that the two lists of ‘validated’ and ‘awaiting evidence’ have been published, products which don’t appear on either should no longer be sold. Novel food legislation is enforced by local authorities. The FSA has stated:

“local authorities, retailers and consumers can make informed judgements about what they stock and buy”

“Local authorities which enforce the novel food legislation have been advised to encourage food businesses whose products are not on the public list to voluntarily withdraw their products from the market and to consider more formal measures where this is not the case.”

A spokesperson for the FSA has told CBD Business News that there is no list of removed products. The FSA website has is advice for businesses whose applications have been invalidated on how to proceed.

Ms Miles notes that the FSA is not guaranteeing the safety of any CBD products:

“I want to emphasise that the FSA is not endorsing products on the public list, and inclusion on the list is no guarantee that they will be authorised as they have not yet been fully assessed for safety. But we have taken the step of publishing the list so that local authorities, retailers and consumers can make informed judgements about what they stock and buy, as we gradually bring this growing market into compliance with the law.”

The FSA has issued on its website consumer advice on the consumption of CBD for healthy adults and vulnerable groups. The only research included, as “the latest detailed scientific report on CBD”, is a discussion paper from the committee on toxicity of chemicals in food, consumer products and the environment (COT) dating from February 2020. The authors of the paper note, “This is a preliminary background paper for discussion. It does not reflect the views of the committee and should not be cited.”

Novel food products are those which have no history of consumption before May 1997. In relation to CBD products, they include oils, drops, tinctures, gel capsules, sweets, confectionery, bread, bakery products and drinks.

The Food Standards Scotland website contains no reference to the latest lists from the FSA. One manufacturer with interests in the Scottish market gave their reading of the situation to CBD Business News, “Strictly speaking, yesterday’s list doesn’t apply to Scotland and Food Standards Scotland has been largely quiet on its own procedures. That said, as and when they make their own determinations, I would expect them to draw heavily both on what the FSA say, and also approvals that are (or aren’t) being given in Europe.

“Perhaps more pertinently, there will in time, I think, be an element of self-regulation where retailers—and particularly those with operations on both sides of the border—assess prospective new products and suppliers based on those with formal approvals, even if those approvals are outside of their own country of operations.

“Consequently I would say that the FSA’s position does have relevance to Scottish operators.”