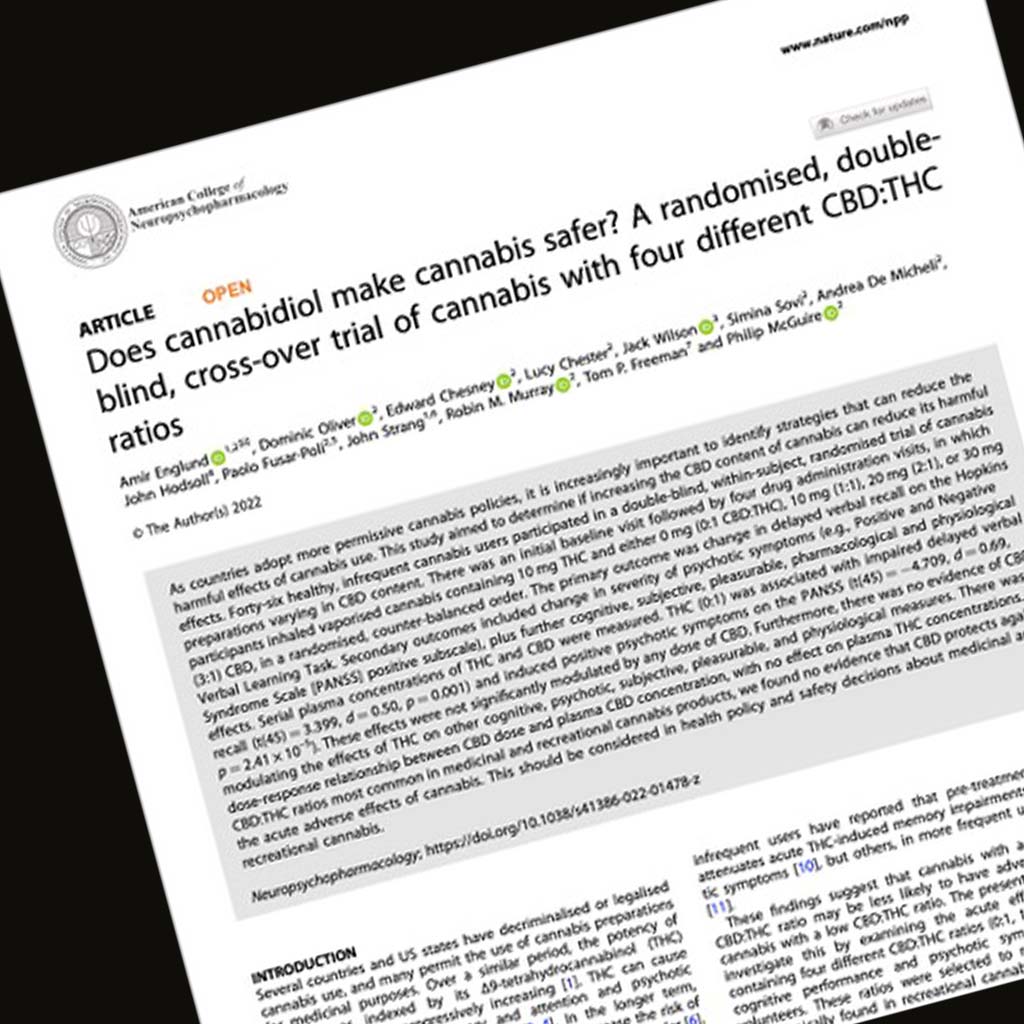 Results of a trial examining whether cannabidiol (CBD) makes cannabis safer, led by scientists from King’s College, London, and funded by the Medical Research Council, have suggested that “the CBD content in cannabis may not be a critical consideration in decisions about its regulation or the definition of a standard THC unit”. Specifically, the trial found no evidence of CBD reducing the “acute adverse effects of THC on cognition and mental health”, nor of CBD altering “the subjective or pleasurable effects of THC”.

These doses represent those typically found in recreational and medicinal cannabis, the authors say.

The study drug was provided by the Dutch medical cannabis manufacturer, Bedrocan, in the form of granulated cannabis inflorescence, and it was administered using a Volcano Medic vaporiser made by German manufacturer Storz-Bickel.

The authors note some caveats to their overall conclusions. One referred to previous studies in which CBD was administered to participants prior to intravenous THC, resulting in attenuated induction of psychotic symptoms and memory impairments; in these studies “relatively large doses of CBD” were used, and the authors say that they might have found similar effects in their own study if high doses had been used, though that would present difficulties in terms of inhalation.

Another caveat contrasts using a manufactured cannabis drug with using plants: “There are other mechanisms by which cannabis with higher CBD:THC ratios may be less harmful to users. The cannabis plant produces both THC and CBD (in their acid forms) from a precursor named cannabigerolic acid, which implies that a plant with a higher CBD:THC ratio will produce less THC than a THC-dominant one. The purported reduced risk from using high CBD varieties (cognitive impairment and psychosis) may thus not be an effect of the high CBD content, but due to the relatively low THC content.

Throughout the article, the authors refer to previous research, showing how their own study is building on knowledge developed elsewhere.

The study was carried out at NIHR Wellcome Trust Clinical Research Facility at King’s College Hospital, London. Participants aged between 21 and 50 attended a baseline session, followed by four experimental visits, with a minimum one-week period between each  visit; the average duration between experiments was 24 days. Participants were asked to avoid using cannabis and all other illicit drugs during the course of the study, including the periods between sessions. At each session, they inhaled vaporised cannabis, then after 15 minutes, participants undertook cognitive tasks for about 30 minutes. This was followed by assessments of ‘pleasurable responses’ using chocolate and music, then a 15-minute hospital walk (a task found to increase paranoia following THC in another study) during which participants had £2 to spend at the hospital shop, and were tasked with getting a receipt.

Time was allowed for lunch and for the intoxicating effects to wear off. When participants felt that at least 90% of the drug effect had subsided, they completed psychological questionnaires and a semi-structured clinical interview. The authors note “We have previously found that assessing participants after the maximal phase of acute intoxication has subsided increases the likelihood of them disclosing delusional thoughts or suspiciousness.”

Of the 64 participants initially randomised, 12 dropped out due to the unpleasant effects of the drugs; the authors note the possilibity that those who completed the study may be less sensitive to the effects of THC. Six further participants were excluded for other reasons. “Of the participants who dropped out on their first visit significantly more dropped out after receiving 3:1, although there was no statistical difference between number of sessions stratified by visit and CBD:THC ratio,” the study notes.

The authors consider the sex-based responses of participants to this and other studies: “Previous studies have found that females experience similar subjective effects of cannabis to males at lower doses of THC, suggesting a greater sensitivity towards cannabinoids. However, in the present study, we found no additional differences when stratifying analyses by sex on any measure, across all CBD:THC ratios—suggesting that females and males respond the same to cannabis when administered the same dose. However, our study was not powered to explore sex differences and further studies with larger male and female subgroups may be needed to clarify if such differences exist.”