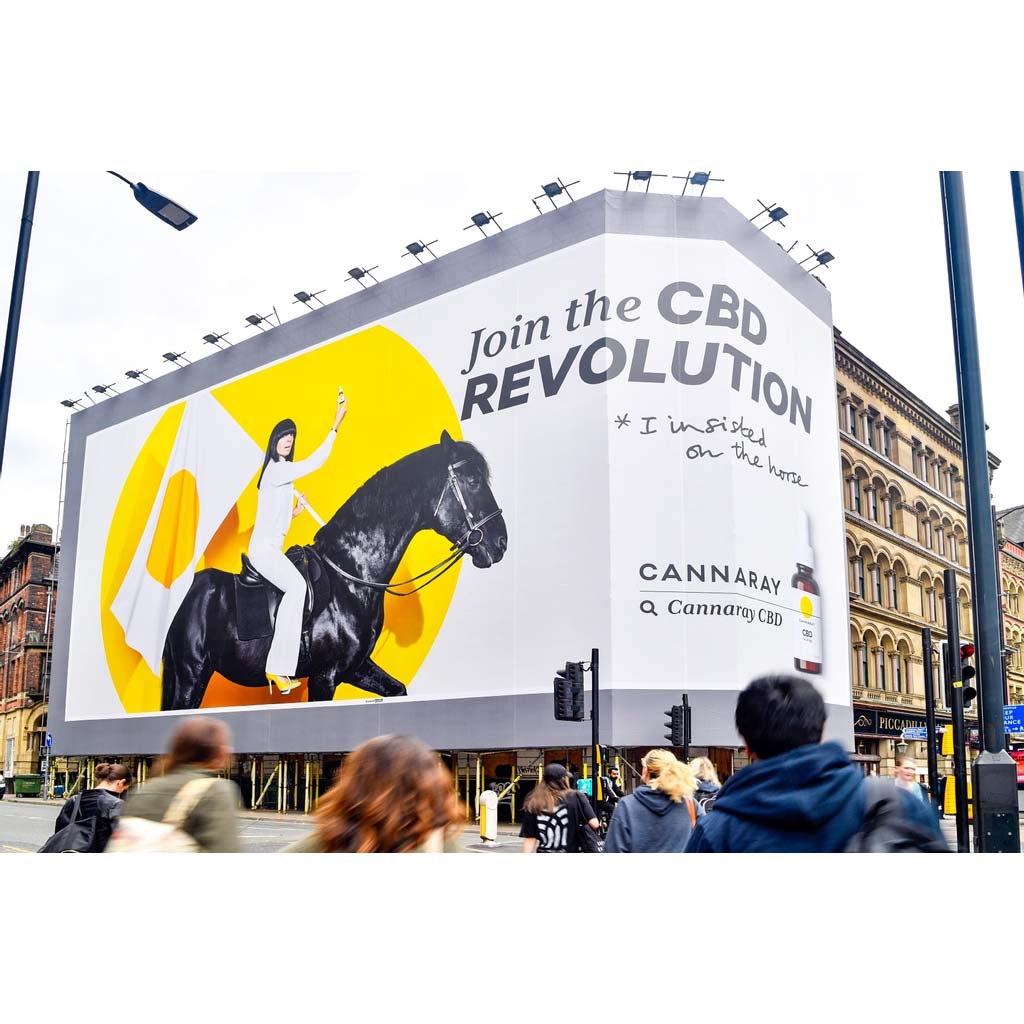 Claudia Winkleman’s special brand of fun and high-style, beloved of Strictly fans, is paying PR dividends for CBD firm, Cannaray. Miss Winkleman announced her new role as brand ambassador on Instagram, sitting on a beautiful, gleaming black horse, whose hair-do corresponded to her trademark look. She was dressed in white with yellow stilettos, Cannaray’s brand colours, holding a flag, and a bottle of CBD oil drops.

The post has attracted 9,394 likes, at the time of writing, with the response on Twitter lagging behind at a more modest 161. The messages on Twitter included one from a follower who had seen the post and bought some Cannaray products.

The story and image was picked up by various online media titles, including Hello Magazine and the Mirror. There has been a nod to traditional advertising too, with a whopping billboard in central Manchester.

Miss Winkleman posted, “Am so happy to say I’m now working with Cannaray CBD. They’re lovely, their CBD oil is bonkers good and they asked if I’d sit on a horse and hold a massive flag. Excellent. (PS the horse is called Miro and we’ve decided to get married.)”

The rationale behind the image is revealed on Cannaray’s website: Ms Winkleman is leading the charge for a CBD revolution: “I’ve always wanted to lead a revolution,” she is quoted as saying, “and am delighted to be partnering with Cannaray CBD to lead the UK’s CBD revolution. I’ve become obsessed with CBD this year as it really helps during bonkers days. I use the CBD oils and capsules – I am officially in love with them.”

Founded in 2019, Cannaray sells a range of oils, capsules, creams and balms, and at the moment is even running a sale. As well as being sold online, the brand is available from Tesco superstores and ‘extras’ across the UK, from independent retailers and over 500 golf clubs, according to the company’s website.

The company emphasises the level of testing undertaken to ensure the CBD content and purity of its products, noting that they are “triple lab tested”, and publishes lab analysis reports from DB Labs in Las Vegas, USA, on its website.