APPG plan to build a UK cannabis industry is published—will permission be granted? 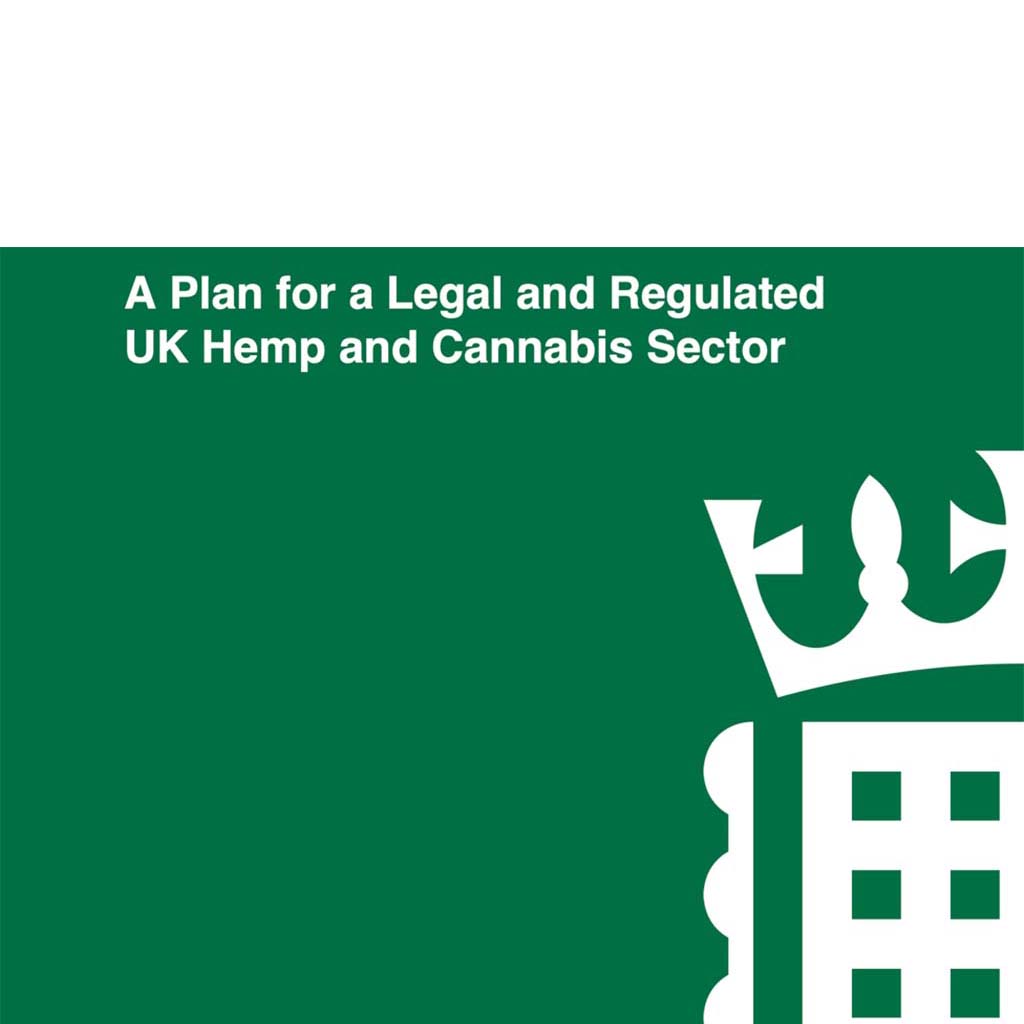 Industry detail, market projections, lists of action to be taken and ambitious deadlines fill the newly-published Plan for a Legal and Regulated UK Hemp and Cannabis Sector compiled by the all-party parliamentary group for CBD (cannabidiol) products (APPG).

“This opportunity is urgent and time limited,” states the Plan as it outlines the economic benefits to the UK of developing a well-regulated cannabis and hemp industry, noting that other countries are “aggressively competing” to develop this sector. “The government must act fast to develop robust regulations that encourage inward investment, support farmers and entrepreneurs, protect patients and give consumers choice.”

The APPG is co-chaired by Crispin Blunt MP and Baroness Manzoor CBE, and works to “encourage the development of UK regulations on CBD products that reflect evidence-based policy, clear industry guidance and the most certain basis for investors and entrepreneurs to enable this industry to safely serve the public and the wider national interests”. APPGs are informal groups of MPs with a common interest in particular issues; reports which they produce are not official publications of either the House of Commons or Lords, nor their committees.

The secretariat of the APPG is CBD company Tenacious Labs, whose co-founder and CEO, Nicholas Morland, co-chairs the APPG’s secretariat advisory board (SAB) which includes some of the UK’s hemp and cannabis trade bodies and groups. Among these are the Medical Cannabis Clinicians Society, Cannabis Industry Council, Cannabis Trades Association, European Industrial Hemp Association, and British Hemp Alliance.

The Plan has been funded and researched by Tenacious, and it has been compiled by the SAB.

The Plan describes its timescale for its listed recommended ‘actions’ as “aggressive”. The first deadline for action is 1 October 2022, by which time the Plan suggests the Home Secretary should “Initiate consultations about amendments to the proceeds of crime act to enable businesses to engage and invest in UK’s legal medicinal cannabis market.” This is the first of two key recommendations in the section of the report which looks at ‘lessons learned’ from other jurisdictions, focusing on the US, with particular reference to Colorado, and the British crown dependency, Jersey. Jersey has amended its own proceeds of crime law to allow Jersey-based businesses to transact with jurisdictions that have legalised adult-use cannabis, even though the activity is still illegal in Jersey; the US is listed as an ‘approved’ jurisdiction, so Jersey companies can own and transact with companies in US states that have legalised adult-use cannabis, despite the fact that under US federal law, cannabis remains illegal.

The second recommendation (deadline 1 March 2023) in this section is that the Financial Conduct Authority (FCA) should issue clear guidelines on the pathway to listing on the London Stock Exchange (LSE). The Plan notes that guidance issued by the FCA in September 2020 was helpful, but “there is still regulatory ambiguity around whole-plant product, which effectively means that companies engaging in the production of whole plant products are barred from listing on the main market of the LSE.”

Each sector is examined and analysed, drilling into detail of regulation, complications and complexity, giving figures for market value and discussion of potential.

Hemp occupies the largest number of pages as there are so many markets and products to consider, from paper to building materials, from textiles to animal feed. The Plan describes it as “the largest market opportunity”. The part hemp could play in nationally important issues such as carbon credits, ‘net zero’ and soil regeneration are set out. It is presented as the answer to various difficult questions which face the government, such as how to reduce CO2 emissions in the construction industry (hempcrete, hemp insulation). The scope of how hemp can be used continues to expand with the emergence of new technologies, including ones which re-use waste products of hemp-processing which can create fuel pellets for biomass boilers (an alternative to wood pellets), and ‘biochar’ which is rich in nutrients and can be added to soil to increase biodiversity and lock in carbon.

“Although the UK has a history of hemp farming, little of it has taken place in recent decades and the country now lags far behind its European neighbours.”

The Plan lists how the cultivation of hemp is regulated in 23 European countries. Only the UK regards it as a product to be licensed by its home office, under drugs and firearms licensing. In the vast majority of countries, the ministries of agriculture are the licensors, three countries require no licence, and in France it is handled by the agency for the safety of medicines and health products.

The Plan lists the administrative requirements and restrictions which make it unappealing for farmers to bother growing hemp, not least of which is having to destroy the flower and leaf in the field, rather than benefiting from this lucrative part of the crop.

The recommendations are that the department for environment, food and rural affairs (DEFRA) should be the licensor, that the licensing process should be simplified, that more seed varieties should allowed, that farmers should not have to destroy flowers and leaves (so they can be processed for CBD) nor the hemp itself if weather conditions have increased its THC level above 0.3%, and that a review should be commissioned into what constitutes a suitable THC limit in consumer products manufactured from hemp (noting that the World Health Organisation and various countries regard 1% as a safe threshold, rather than the UK’s 0.2%.)

The list of actions details specific amendments to the licensing process and practice, noting the four government agencies/advisors/units which would be involved. The deadlines set are all 1 November 2022.

In the section on ingestible and topical products, the application of the UK’s novel food regulations to hemp-based food supplements comes in for trenchant criticism:

“Today, the vast majority of CBD food supplements sold in the UK are imported. This is due to current restrictions on hemp cultivation and the onerous novel food (NF) process, both of which effectively preclude UK farmers from accessing this high-value-add consumer segment of the CBD sector.

“The NF process is costly, onerous and lengthy, which means that the route is accessible only to large companies with sufficient scale and resources. It has proven to be a significant barrier to entry for UK companies, resulting in the UK consumer CBD market currently being dominated by foreign companies.

“The Novel Food process has proven to be a significant barrier to entry for UK companies, resulting in the UK consumer CBD market currently being dominated by foreign companies.

“A review of available scientific evidence on the safety of hemp and derived foods is currently under way. Once the findings are available, the FSA should review the future application of the NF process and whether the process should relate to all products containing cannabinoids or whether any products could be made exempt from the process. The agency should consider the history of the use of the whole cannabis plant as food in the UK and the significant consumer demand for whole-plant products. It should also review alternative regulatory approaches, such as the dose-based approach.”

The Plan returns to its concern about the UK’s THC limit in cannabis-based products, describing it as an “outlier”, and the negative impact on the industry, causing a missed opportunity for the UK: “The current focus on permitting only CBD isolate sales in the UK nullifies the potential economic benefits for a domestic UK industry, as isolates are an oversupplied commodity dominated by US and Chinese manufacturers. Allowing reasonable levels of THC in consumer products reflects the reality of the UK market, assuring consumer safety whilst preserving consumer choice.”

Other recommendations relate to standardising testing protocols, the use of certificates of analysis and origin, and developing labelling guidelines, calling specifically on the FSA to establish clear definitions of different product types, based on the variety and potency of active substances.

All these recommendations have a suggested deadline of 1 November 2022.

Taking the third legal sector, medicinal cannabis, the Plan examines the global picture, stating that more than 55 countries now have or are considering legal access programmes. It notes that, “The UK is an unchallenged leader in the pharmaceutical sub-set of the cannabis industry. The pioneering work of GW Pharmaceuticals (now Jazz Pharmaceuticals) has contributed vast amounts to advancing our knowledge of cannabis, bringing to market two licensed medicines, and demonstrating the power of cannabis in managing some of the most intractable diseases.”

The experience in Australia is summarised, where GPs have been allowed to prescribe medicinal cannabis since it was rescheduled in 2018, whereas in the UK it can only be prescribed by specialists. It cites research by MacPhail and others, saying “As of 31 August 2021, the Australian healthcare regulator has issued 159,665 special access scheme approvals for medicinal cannabis products, primarily for pain, anxiety, and sleep disorders.” In the UK, only three patients have received NHS prescriptions for medicinal cannabis in the same period. In Jersey, GPs are allowed to prescribe such medicines.

Three licences/certificates are required in order to produce high-THC medicinal products. The Plan argues that a confusing regulatory process will lead to fewer participants in the market, which in turn will limit the competitiveness of market pricing structures.

It recommends that this licensing and certification system be streamlined and co-ordinated.

The deadlines for these actions are again, 1 November, apart from that relating to GPs and pharmacists, which is set at 1 February 2021.

Copies of the Plan were sent to relevant government ministers, and their secretaries of state, special advisors, and department directors—28 physical copies as well as 500 emailed copies to MPs and interested parties. There will be a full parliamentary launch in mid-September. A copy of the Plan can be downloaded from the CTA website.